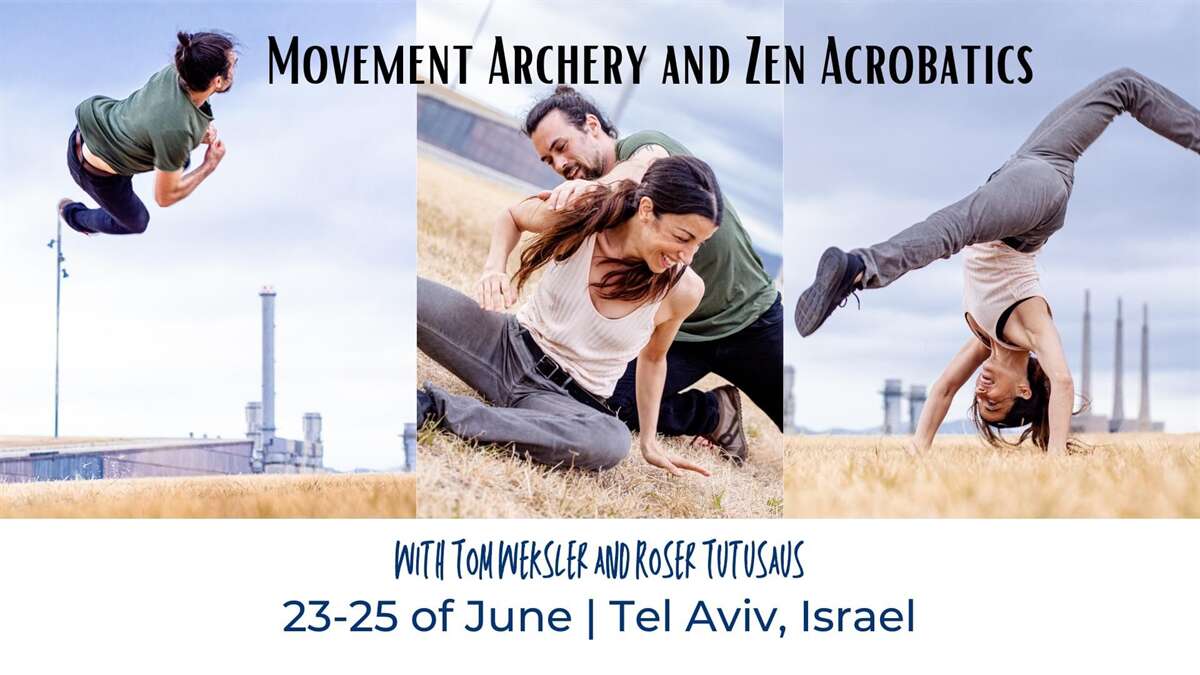 A unique workshop established by Tom Weksler and Roser tutusaus. A collaboration of dance, movement and other art forms.
“The right art is purposeless, aimless. The more obstinately you try to learn how to shoot the arrow for the sake of hitting the goal, the less you will succeed in the one and the further the other will recede. What stands in your way is that you have a much too willful will. You think that what you do not do yourself does not happen.” - Eugen Herrigel

Each day of the workshop will consist of 4 parts

Part 1 - Warm-up
Movement Archery`s concept of warm-up is based on the mover’s need to tune into a clear and subtle quality before their practice and execution. The routine that will be taught is inspired by concepts borrowed from Internal Martial Arts, Yoga, Cranio-Sacral therapy, Alexander Technique and Meditation. The warm-up routine emphasizes the opening of the darkest parts of our bodies - our legs, which are also the most distant from our eyes. Demanding postures alongside gentle flow with circular motions and spirals will be introduced in order to provide better awareness of the directions of forces that constantly influence the body from within. We will also study how to maintain the gentle functions of the wrists and neck as tools for balance, sensing the space and organically digesting physical information - internal and external.

Part 2 – Clean Paper
Clean Paper is Tom and Roser`s authentic proposition for improvisation as long-term pursuit. Rather than a system or a manual, Clean Paper is a conceptual frame-work that invites to experience the different inspirations and motives that each practitioner has for their own creative practice. Through discipline and playfulness we will try to define what are the most basic reasons for moving creatively covering themes like imagination, sensations, intuition and planning. We will share our findings through dialogue to take advantage of the uniqueness and particularity of each opportunity to engage with this practice in a new place and new partners.

All in all, we will keep a constant acknowledgement that all is subject to change and that what we don`t know is much more than what we do know.

Dancing alone is a relationship with imagination, and dancing with a partner is a relationship with reality. these two perspectives are fundamental and supportive of each other. if we practice one without searching for creative connections with the other, we miss out on the growth and novelty that is at the core of a movement practice. The Natures of Partnering is a body of work that is based on recognizing and practicing 4 types of relationships: the relationship with the self; the relationship with the floor; the relationship with the space; the relationship with another body. the study and interconnection of all 4 leads to skill, virtuosity and open-mindedness. It enables the line between imagination and reality to gracefully fade away. And then, solo dance and partner dance become inseparable. In this process, we embrace questions, open communication and unexpected dialogues. All have endless developments and open a potent space for expression and self learning. Dancing with another person is constant acknowledgment of the unknown. it demands listening, adapting and re-evaluating. In that sense, it is a perfect practice for learning to let go of the strict definition of the self and moving into unexplored creative landscapes.

This approach to acrobatics has developed from the urge to look for freedom in movement. It led me to the wonderful paradox between meditation and acrobatics, the attempt to find tranquility in the chaos, to understand whether it is possible to create a practice that is inspired by the eye of the storm. The main goal is to find a movement quality that supports simple actions like walking and running, as well as acrobatic feats without a difference in effort, mental fatigue or structural tension. To do this, we will search for high levels of awareness and precision so the body can react quickly to the changes in skeletal stress, and to maintain flow without unnecessary distractions. In classical acrobatic disciplines, preparation, climax and landing are being treated as completely different aspects while usually one is more important than the other. In Zen Acrobatics, the practitioner aspires to transform all 3 states into one motion that can ultimately connect to any other type of movement. Personally, this type of practice over the year has given me confidence, joy and a more calm and serene mind. It allows me to tap into somewhat of a child-like state, which supports me both in my artistic career and in my personal life.

​
About Tom and Roser
Tom Weksler has been practicing Martial Arts and different forms of acrobatic disciplines from a young age. Tom graduated in 2009 from “The Workshop For Dancers and Choreographers in Haifa”. Since 2010, Tom has been dancing with “Inbal Pinto and Avshallom Pollak Dance Company” and performed with the comapny’s productions in many theatres and festivals around the world. Tom is currently performing around the world the performance “Collective Loss Of Memory” - choreographed by “Rootlessroot” (Jozef Fruček and Lind Kapetanea) and produced by “Dot504”. Since 2017 Tom has been dancing with Guy Nader and Maria Campose Dance Company.
In 2012 tom has created `LOBOS` in collaboration with Yogi Dekel and Breno Caetano. In 2014 Tom Created the Duets "SARU` and "Heder" in collaboration with Tokyo Based Dancer and Choreographer Mayumu Minakawa. Both Duets has performed internationally in various theaters and festivals. In 2017 Tom has premiered the Duet "Pilim" in Collaboration with Circus Artist Yogi Dekel. Since 2017 tom has also established an artistic collaboration with Catalonian Dancer and Choreographer Roser Tutusaus. The collaboration is currently in process of completing the theatre piece `After The Rain` (premiered in Bari, Puglia in 2018) and the street piece "RISE".

Roser Tutusaus has graduated in B.A of dance from Artez Dansacademie, Arnhem (Holland) as well as journalism from, Universitat Autònoma de Barcelona. since then, Roser worked for different choreographers in Holland like Anouk Van Dijk, Giulio D’anna, Anouke De Groot and Erik Kaiel. She has also collaborated with several companies in Spain such as `Transit Dansa`, `Enclave Arts Del Moviment` (by Roberto Oliván), `Ana Eulate`, `Lamajara Collective` and `Pere Faura` in the trilogy “Sweet Suite”. Currently she is working and performing internationally with the Company "Guy Nader and Maria Campos" in the piece “Time Takes The Time Time Takes” co-produced by Mercat De Les Flors in Barcelona as well as “Set Of Sets” to be premiered in Mercat De Las Flors in April 2018. Roser also created “Menar” a street duet with Joan Aatalà premiered in Fira Tàrrega 2016 and on tour for the summer of 2017. in parallel, and out of curiosity, Roser is also developing her own artistic work with two solos “Simun” and “Tecnologias Del Yo”. Which performed in various festivals and venues across Europe. Roser has been in dialogue with Tom since 2017, both on the creation of the Duet `After The Rain` and development of a mutual dance practice.

​Tom and Roser have established Wonderground Company in 2019, focusing on creations which are departing from the collaboration between dance, movement and other art forms.